So much has been written lately, on Multiple Myeloma websites, about potential breakthroughs into the mystery of MM. The cause of this incurable type of cancer is unknown, but it has been mentioned that it "could be" caused by Pesticides, Herbicides, Petroleum based products, Wood Dust, and/or Agent Orange. (My honey has been exposed to all except Agent Orange.)

Of course, no one really knows the reason for MM......but it has also been stated (by New Zealand researchers) that people raised on Livestock farms may be more susceptible to blood cancers (of which Multiple Myeloma is one). http://www.medpagetoday.com/HematologyOncology/Hematology/27796  (My honey wasn't "raised" on a livestock farm; but he was a livestock farmer. So, are our daughters in danger?)

And then there's Dr. Bradner, of the Dana-Farber Cancer Institute, who helped to create a hybrid molecule which has been named JQ1.  This molecule is thought to attack the cancer cells and make them become normal (I'm paraphrasing and stating this in layman's terms). Mice (not sure if they were The Three Blind, or not) were injected with Myeloma cells and then the hybrid Molecule. The mice that were injected lived, mice that were not injected with the Molecule JQ1, died. Dr. Bradner shared his findings with 40 labs, in the US, and 30 in Europe - many of them pharmaceutical companies. Hopefully, this will soon be turned into a pill and can be tested in humans. Amazing! The possibility of an oral drug which will make a cancer cell think it's a normal cell!

http://www.ted.com/talks/jay_bradner_open_source_cancer_research.html
(The transcript of Dr. Bradner's talk can be found on the right-hand side of the page.

Vaxil, a drug company in Israel, is in the process of developing a vaccine http://unitedwithisrael.org/israel-develops-cancer-vaccine/ and testing it against MM. This vaccine is supposed to treat cancer, and keep it from returning. Of course, this will have to be approved in the US by the FDA, and go through clinical trials here in the USA.  Admittedly, it's a long way out........but perhaps there will be hope for someone, somewhere down the line. 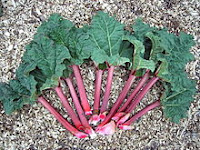 Rhubarb, a plant typically grown in cooler climates (Midwestern and Northern states in the spring) has a compound Bipterostilbene which seems to significantly inhibit proliferation of myeloma cells and has been said to EXTERMINATE myeloma cells.

The plant stalk, which is very tart, is the only edible portion since the leaves are toxic. Usually, the stalk is combined with strawberries (Strawberry Rhubarb Pie or Strawberry Rhubarb Jam). The Chinese have used rhubarb, for centuries, as a laxative. I wonder how prevalent Multiple Myeloma is among their people?

The testing was performed on two groups of postmenopausal women, but eating this fruit can't hurt MM men, either. And, it was believed that eating the fruit even reversed some of the bone loss. My honey isn't much of a "prune fan" but think of the "other" benefits (no laxatives needed)!

My favorite article was on the website http://www.medpagetoday.com/ where it was stated that smoking and drinking liquor appears to "reduce" the risk of Multiple Myeloma. http://www.medpagetoday.com/clinical-context/MultipleMyeloma/29308 Thankfully, since I don't smoke (and don't intend to start) it seems that liquor has the greatest benefit. My honey has always been a teetotaler, so everything I said in the first paragraph just goes down the drain. It wasn't the pesticides or herbicides or wood dust or petroleum based products (paints and paint thinners) - it was his not drinking that caused it!  I'm now sure if he'd taken a snort every now and then, we wouldn't be facing this problem!! Of course, this study didn't reveal how many of the smokers ended up with lung cancer, or how many of the drinkers became alcoholics. They just didn't have Multiple Myeloma!

Molecules, Vaccines, Rhubarb Pie, Prunes, Liquor......if it isn't one thing, it's another. Just never know what may be coming down the pike and what might work. But please excuse me while I put my computer away and go get my glass of wine. If liquor works, I'm sure wine does, too!!
Posted by Unknown at 5:00 PM