Already, the rash is getting better! My honey is beginning not to look so red and blotchy, and the itching is  better. The half-life of the Revlimid is 3 - 4 hours; so this stuff should be out of his system between 5 p.m. and midnite. This just may be the "easiest" side-effect we've ever experienced. (And the one that's red and scratching says "Easy for you, maybe")! 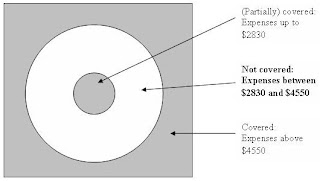 This morning, I went to the Pharmacy to retrieve one of his "Brand name prescriptions", expecting to pay almost $200.00. When the clerk asked for $9.35, I said "There must be some mistake......we should be paying full price for this". They laughingly told me they'd never had anybody complain that their drugs didn't cost enough.

What I hadn't realized was that, not only would the Revlimid put him in the donut hole.....it would push him right on through, because of the high cost! He's now in what's known as the "Catastrophic Coverage stage" (Stage 4) which makes his other drugs costs less than when he was in Stages 1 and 2. Who knew that the high cost of the drug might, in some way, turn out to be beneficial.

Things are looking up at this house......the rash and itch are better, so much so that he will be back swallowing those chemo capsules, tomorrow. Wish all his side-effects could be resolved this quickly, and hoping this is the only one that he has - from this drug!

It only took three doses of the Revlimid  (lenalidomide), and my honey looks like someone that got into a bed of poison ivy! The itching started late Monday, though in typical Bob fashion, I wasn't aware of it until Tuesday morning. The rash didn't make its appearance until later Tuesday morning.

I first gave him Benadryl, and then I called the Cancer Center. His Onc. told me that the itching is "very rare" (not what I'd read, or heard, but he's the doctor, so I didn't disagree). He suggested that he'd have his nurse call our Pharmacy and order Atarax, for Bob. Atarax is an Antihistamine which is prescribed for itching, hives, allergies, insomnia (oh good....he sleeps most of the day, now), nausea, and anxiety (can I please take one!).

I picked up the prescription and gave him one. I understand why it's for itching.......when you're sleeping, you don't have a tendency to scratch!! The Atarax can also cause dizziness (and, it did), and can cause "reddening of the skin" (really don't need anymore of that!).

The rash appeared later, and by this morning, had taken up full residence in his body. The insides of his arms don't have "whelps" or "blotches", they are just one continuous big red "splotch". It's on his stomach and on his back. My concern was when his face and neck began to be covered, and when I read on one of the Myeloma websites that his throat could begin to close if the rash got that far!

Another call to the Cancer Center. Stop the Revlimid. After a couple of days, it should clear up, and when it does (did they say "when" or "if"?) start the Revlimid, again. It "should not" cause a rash the 2nd time, around. He doesn't feel good, and bless his heart, he certainly doesn't look his best - all red and blotchy. I hope it goes away soon; I know this is getting old for him.

Just hoping this drug is doing as much damage on the inside, to the cancer, as it's doing on the outside!

On Friday, August 12, 2011 Bob's onc suggested that his next course of treatment would be Revlimid, an expensive chemo capsule. Revlimid is shipped to the home of the MM patient, from a pharmacy distribution center.

It took one week, and multiple phone calls, to get the drug approved and finally shipped. We were told that the drug, which had been prescribed by Bob's oncologist, had to be approved by Medicare, the FDA, and a group of doctors. It has been one week since his oncologist ordered this drug;  my husband has cancer and someone who has no knowledge of his health situation is making a decision about his medication! Needless to say, I forgot my "southern raising" and gave my "opinion". (And, I couldn't help but wonder what would transpire once the Obama Healthcare plan is in place.)

The package arrived, and upon opening, we read the warning at the top of the med pack: 'Caution - Chemotherapy. Handle with gloves.' So, he can ingest......he just shouldn't touch! (We don't put on gloves, but we do "dump" it onto a napkin....and he picks it up that way.)

I, very carefully, read the list of side-effects,  and couldn't help but wonder which one he'd be having! The Revlimid is taken daily in conjunction with 40 mg. of Dexamethasone, which is taken weekly. The Dex has already begun to cause swelling in his feet, and his hiccups are back. Revlimid can cause bone pain,  rash, blood clots, low white counts, low platelets, fatigue, and probably so many other things.  There have also been many articles on the possibility of  'secondary cancer', caused by Revlimid. I just don't let my mind go there! I think I finally have him convinced to tell me if he feels any changes, in his body.

This morning we visited (well, it wasn't really a visit.....it was an appointment)  with Bob's oncologist, Dr. H. And, as expected, my honey is going to have to have chemicals (chemo) again, to try and fight the enemy (cancer).

His M-Spike (Monoclonal Protein) is still at 0.3 m/dl, but for the first time, he has a lesion. Per his recent MRI, there is a "punched out" (hole) lesion of several centimeters in his left back hip. For those of you unfamiliar with the term lesion, it's explained as holes in the bones that look like lace, or swiss cheese. His last MRI was in December, when there were no lesions. The Myeloma is really waging war. He wasn't surprised, since he has been experiencing pain, in that area.

After reading the MRI, I realize that his back is in terrible shape, because of age and the cancer.  I try to refrain from so many "please be careful" admonitions......but I don't want him in a wheelchair. He's the "man"....he's always been the one to pick up the heavy stuff, so it's embarrassing for him to have me doing the heavy lifting.

Dr. H suggested Revlimid, this time. Velcade has been successful but has caused neuropathy (terrible pain and tingling, in his feet), and because his M-Spike has already started to creep back up (after only a couple of months), it is now considered to be ineffective. Revlimid is a tablet, taken at home, 21 days with steroids (Dexamethasone).

It's known that Revlimid can cause (1) secondary cancers (2) nausea (3) kidney problems (4) blood problems. Knowing how Bob has reactions, to EVERYTHING, it scares me to death to have him swallow, anything new, or different!

Revlimid is Chemo - a tablet - but it can't be picked up with a prescription, at your local pharmacy. This afternoon the phone call came from the pharmacy, in Florida, that will ship the drug to us (after he's approved). It's a good thing that I don't have heart problems - his Velcade was $3,710, each week. This is much worse. I would really suggest the Customer Rep not start a conversation with "your cost will be $2,000, each month". (This wasn't how we intended to "spend" our retirement!)

There is "assistance" (the Chronic Disease Fund) to help defray the cost of this drug. It helps with the $2,000 tab, but immediately puts Bob in "the donut hole", so all of his other drugs will be at full cost, for the rest of this year.....and for as long as he's on this drug. We (Bob and I) have differences of opinions. I will do anything, ANYTHING, to keep him with me. Bob, on the other hand, does not want to leave me penniless. And, Celgene (drug company that makes Revlimid) gets rich!!

What a stressful day, and we only wanted to know what his M-Spike was and if he had to have more treatments!!!

After a thunderstorm and overnight stop in Fort Payne, Alabama, we got the RV home from Virginia without incident. Well, not really........Bob had no problems, but we were trucking down the Interstate (I-20) and suddenly, we heard a terrible noise. It sounded as if the canopy had come loose (we knew that sound, since it had happened once in terrible South Dakota winds). Bob pulled onto the shoulder (I'm really not crazy about having to do that) and we both got out and checked thoroughly (okay, we thought we checked). The canopy was fine, and nothing else seemed to be out-of-place.

Back in the RV, and headed down I-20, the noise started again. I began searching, and finally stood up and looked down (out my window). It looked as if the front panel, over the right front tire, was going to start on a trip of its own! Now, anyone that knows me, knows I didn't calmy say "the right front panel is coming off"! (Yes, I was very animated.) Bob pulled off the Interstate, at the next exit. (Thankfully, it was an exit with a Truck Stop.) After examination, Bob discovered that the screws were coming out of the panel. We dug through the tools that we had on board, and finding nothing to fix the problem, decided that the Truck Stop might have something more. (There were lots of "No, Sarah, that won't do!) After several minutes, my honey returned with the magic "Fix All" (Duct Tape). After a few minutes, and all taped up, we were ready to go. Now, didn't we just look like the Rednecks on Vacation!!

We arrived home, without further incident. What's a trip, without a little excitement!!

We had to get back home because it was time to check and see what the Myeloma was doing!  On Monday, we went to the Cancer Center so they could get vials of my honey's blood.  After the "blood-letting" we toured all the RV Campgrounds, on the beautiful Mississippi Gulf Coast. It's time to camp closer to home, in the event my honey has to get back to to his doctor.  We never know which side-effect he's going to have, next! I did suggest to him; if I completely lose my mind, or get eaten by a big dog, DO NOT allow anyone to change any of his medications, period!

After a long day of touring, we finally decided on a spot in an RV park on the Back Bay of Biloxi. We'll be able to dip our line into the water, and we're minutes from the beautiful beaches of Mississippi. It reminded us both, of happier times (before cancer), when we camped with dear friends, in Florida.

And yes, he did remove the duct tape....and the panel is fixed! And, for the record, I'm putting safety pins and scotch tape in the tool box.