We entered into the month of October with a bit of trepidation, and rightfully so. This past week, two years ago, we were back and forth to the doctor searching for answers. We had just celebrated our 50th Wedding Anniversary, took off on what was to be a great adventure in our RV, and things began to go downhill from there.

October, 2010 was the month my honey was diagnosed with Multiple Myeloma, and began to face the pain and treatment that accompanies cancer. 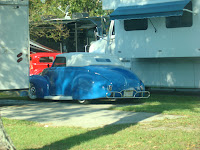 October, 2011 - one year later - back in our RV and on the beautiful MS Gulf Coast......he became very ill.  Pneumonia, Renal Failure, and later, a Staph Infection, provided him with a "most expenses paid" three week stay in the hospital. 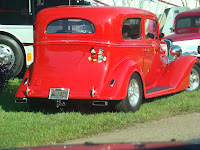 October, 2012 - two years later - back in our RV on the MS Gulf Coast (stubborn and determinded).  Enjoying beautiful weather with newfound friends - people who had come to enjoy the week long 16th Annual "Cruisin' the Coast". Over 6,000 antique cars and trucks representing 37 states and hundreds of cities and towns converged on the cities along the coast.

This October, my honey is doing good - pain pretty well under control (with meds), no illness or infection, and still in remission. He manages the fatigue, weakness and instability that seems to accompany his disease.

Unfortunately, yesterday we realized this October was to be no different than the other two. It has been marked by sadness at the death of a dear friend, Kermit Littleton. He and my honey had been friends for over 60 years. Kermit was diagnosed with cancer just 8 months after Bob's diagnosis, and he didn't live quite as long as the doctor predicted.

Next weekend we, along with the third couple of our group, Sam and Ann Greco, will head to the north Georgia mountain town of Ellijay, to celebrate Kermit's life and surround his wife, Nita, with our love. We'll say goodbye as his ashes float in one of the trout streams, where he loved to fish.